As the name suggests, these coins bear the symbols of various types, punched on pieces of silver of specific weight. Punch-marked coins are marked with 1-5 (and sometimes more) marks representing various symbols.They are broadly classified into two periods : the first period (attributed to the Janapadas or small local states) and the second period (attributed to the Imperial Mauryan period). The motifs found on these coins were mostly drawn from nature like the sun, various animal motifs, trees, hills etc. and some were geometrical symbols.
Ancient Indian coinage was based on `Karshapana' unit that consists of 32 rattis (3.3 grams of silver) and a 'Ratti' is equivalent to 0.11 gms. 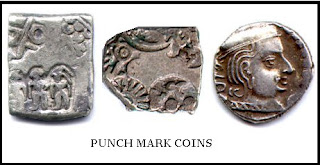 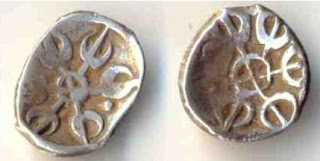 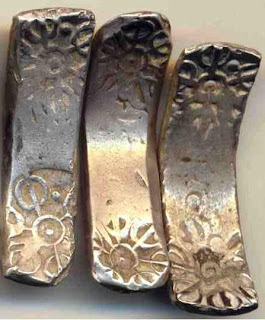 Posted by SravanthiBharat at 5:55 AM

I have a hobby in collecting coins/notes too. Could you tell me where could I find such coins?
Would be great!

ID is - ankittc [at] gmail.com

See: The World of Buddha Footprints

Pali literature of S. E. Asia states that there is NO triratna symbol but a nandyvarta. It is a flower.

I would appreciate you reaction.

Nice Coins I liked This One